Reporting from a warzone 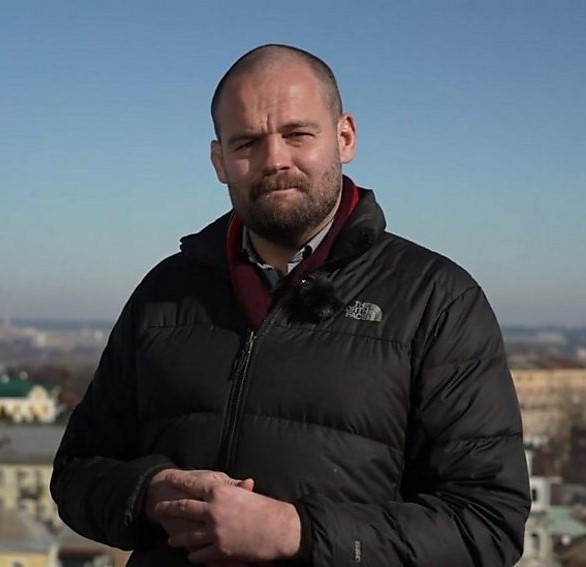 James Waterhouse is a BBC News correspondent who began his first ever foreign deployment at the start of the year in the Ukrainian capital, Kyiv. Weeks later, he found himself reporting from the frontline of a war zone, covering one of the most consequential stories in recent memory. With his permission, we’ve reproduced in written form an interview James gave to BBC Radio London’s Riz Lateef on a brief visit home – where he discussed the impact the conflict has had on his mental health, and the ways it’s changed him.

It was mid-January, the day before I landed (in Kyiv) it was minus 20 Celsius, it then rose to a lovely minus 11; the pavements were layered with snow and ice and the decision to pack my jogging gear was a poor one! But it was a vibrant city – a city so much like London – 4 million people living there, going out there, making the most of all the choice.  And it wasn’t a city that was preparing itself for war.

The day the conflict began

My phone went off at about 5am and I was just told in no uncertain times to get my stuff together and to get up on the roof where we, as a team, were based and we had been broadcasting from. You could hear (what I describe as) a combination of Fireworks Night and a thunderstorm, with thuds and crackles in the distance. The sky was being lit up in ways we hadn’t seen before and this familiar skyline we were looking out to, with all these distinctive buildings, it was different, and there was the occasional sound of a low-flying fighter jet going overhead and – of course – we had no idea what side that jet was on.

Sounds become a very big part of it and the first time you hear these sounds, they are at their most haunting, and that first air raid siren, that sounded at around 7 o’clock that morning, it would have been haunting to thousands of people – the way it echoed through the centre of the city. The silence (that followed) would be occasionally punctuated with the thud of artillery fire, you might be able to see a dark plume of smoke, we saw a few targets hit around the Dnipro river but you learn with everyone else what is happening, you learn to get used to these sounds.

This was my first warzone, and I didn’t have time to process it – the most striking thing is how quickly things change.  The moment that first boot crossed the border, the moment those first shells or missiles started hitting Ukrainian targets, the country changed forever and it was very difficult to process.  We just reverted to doing our job; I was with my producer Anna – who is from Kyiv, born and raised – and I think that helped me get through by just seeing what she was going through, and I don’t think even she believed that things would escalate to the way things have, and that to me helped me retain some perspective. But of course, it was incredibly fast-moving – everyone was talking about this so-called Russian “lightning strike”, that they would advance from the north from Belarus where they’d been doing joint exercises for weeks, and we saw Ukrainian soldiers burning piles of paperwork and we started to wonder, “what is coming? What could be coming?”

We had a top security team out there, the BBC has a high-risk team and they’re always looking at the information and making on the spot judgements, and the moment they said “it’s time to get down”, there would be no arguing!  I remember walking down the flights of stairs to an underground car park and feeling my chest relax a bit as you headed underground because you were heading to somewhere safe where there would be some certainties but there were people who just had looks of disbelief, shock, fear and we were down there with one woman from Chernobyl whose elderly parents she was struggling to get hold of. She was incredibly frightened, and I’ll always remember watching her reaction – the Russians took Chernobyl on the second day of the invasion and they forced her parents into a cellar underground, they came back up to find their building in rubble so people would be learning in real time what was happening.

We were working with Lyse Doucet, Paul Adams, Jeremy Bowen – all these colleagues you’ve looked up to for so many years – and they were so calm in the face of all this chaos unravelling around this poor city and country, they were another source of strength, you could work together, try and corroborate the reports you were getting.  For us, it came down to levels of risk and what was acceptable to you as an individual. We always had the option, the moment we wanted to leave, we would be able to do so as soon as it was possible and as long as it was possible – which I certainly appreciated – but for me, working in the capital, with the team around me, looking at the nature of the advancing Russian attack, that was acceptable. But it is a deeply personal choice and the reasons for people wanting to leave, whether they were journalists or residents, is that people did get trapped there, so we respected each other’s choices.

I didn’t feel lonely, we were working in very close proximity – because our freedom of movement was all of a sudden extremely restricted – so it was more about managing heightened stress, and that was a massive burden.

You learn your different coping strategies.  That was not thinking more than an hour ahead, “what do I have to do in the hour?” What are we being presented with at the moment?”  I would often listen to music – Faithless or Pete Tong’s Ibiza Classics – bizarrely, I found house music really helpful and the more bass, the better!  You really rely on that. A friend of mine from uni, who’s now a psychologist, she said you should play games as well like Tetris or something, so I was playing a pool game on my phone and it just helps you process things so all these little things helped me cope.

I think I learned I have a fairly high threshold for managing stress, but also I realised how much I believed in what I was doing – we look at this as a job but it’s a brilliant job, it’s a privilege to witness big events on this planet, and there was no bigger event than this.  To be at the heart of it was something that was a privilege.  There were days where there wasn’t much joy where it was just objectively difficult to work or find any kind of downtime or release, it boiled down to this is the best job in the world, what we are able to tell people about may well affect decisions in the future that will hopefully prevent more wars like this happening.

What James felt as he prepared to head back to Kyiv

I do feel ready (to go back), the level of risk is still acceptable, this conflict unfortunately is entering a new phase – a much more static phase – but that doesn’t mean this conflict is going to be any less deadly because both sides are digging in, the Kremlin has shown it has no qualms in a long drawn-out conflict, and the worry is how long Vladimir Putin will dig in for, or what he’ll resort to to achieve his goal.

My family have been massively supportive, they know I believe in the importance of being there, it’s of course been really difficult for them, but we’ve also worked out a good routine of staying in touch and it comes down to communication, ringfencing time to see each other but they’re incredibly supportive, the risks we take as journalists, we have a brilliant team around us to mitigate those risks and the perspectives you gain from the immediate environment around you, it allows us to cope and justify why we’re there.

You can hear James’s conversation with Riz Lateef in full on BBC Sounds here.